MLK would have shrugged at segregated CBS ‘Survivor’ stunt 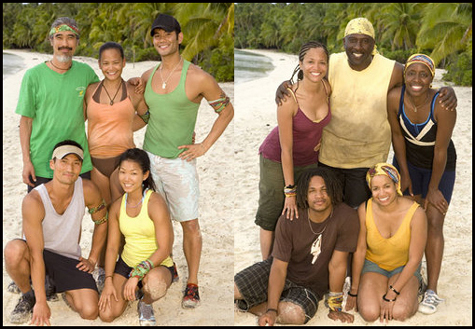 CULTURE SCHLOCK – By Darren Garnick
“Segregated ‘Survivor’ stunt taken way too seriously”
The Telegraph — September 14, 2006
**
So tonight’s the night that reality TV is supposed to overturn the
landmark Supreme Court case, Brown vs. the Board of Education. First
“Tribal Council” and “Immunity Challenges” will be segregated by race,
next it will be our nation’s public schools.

Given the hysteria surrounding CBS’ Machiavellian “social experiment”
to have white, black, Asian and Hispanic teams on “Survivor: Cook
Islands,” you might think the only remaining sponsors are the Ku Klux
Klan and Skinheads ‘R’ Us. At press time, GM, Procter & Gamble, Home
Depot, Johnson & Johnson, Coca-Cola, and Campbell Soup have all pulled
ad deals coinciding with the negative buzz.

“It (Survivor) has lit up the white-supremacist world,” the Southern
Poverty Law Center’s Mark Potok told Television Week, an industry
trade journal. “It’s been a fairly remarkable reaction. (The format)
plays into the hands of many people in this country who have racist
feelings.”

I love the Southern Poverty Law Center. Civil rights attorney Morris
Dees made me a fan for life a few years back when he sued an
Idaho-based hate group for the rights to the name “Aryan Nations.”
Not only did he shut down the group’s headquarters, but he also went
after their letterhead, coffee mugs and embroidered jackets.

But here’s where the SPLC and I diverge. This is the Archie Bunker
Effect 2006, pure and simple. A white supremacist and a normal white
guy can watch the same TV show and walk away with completely
contradictory messages.

Sorry, but athletic-based contests pitting people of different racial
backgrounds against each other are hardly novel. That pretty much
describes my high school football experience whenever we white
suburbanites hit Lowell or Lawrence. And likewise, whenever Nashua or
Manchester teams play the Hollises, Amhersts and Bedfords.

The Olympics, World Baseball Classic, Miss Universe Pageant and
similar events pit different nations against each other, which in many
cases breaks down to race. Here’s where the slippery slope comes in.
The Asians, blacks and Hispanics all can claim a solid identification
with a nation or culture — my favorite character so far, Billy
Garcia, is a wrestler who calls himself the “Spanish Fly.”

So what is the white guy culture? That’s the hot button issue with
the supremacists, who’ll start tossing out terms like “Aryan” and
“Nordic” to describe their ancestral pride.

CBS would have been on much safer ground if they had a French team, a
Kenyan team, a Vietnamese team and a Brazilian team.. But then the
“race card” wouldn’t get Survivor all this press, which it desperately
needs in its 13th season.

Personally, I’d root for any team opposing France. A few years ago, I
found myself rooting for Senegal (against France) in a World Cup game
I otherwise wouldn’t have cared about. I’d also love to see an
all-Quebec edition of Survivor pitting French vs. English speakers.

Survivor has already played the age and gender cards, intially putting
young and old men against young and old women. The only cards left to
play, really, were race and ugly vs. beautiful. The latter dynamic has
been exploited extremely well by Ashton Kutcher’s “Beauty and the
Geek.”

For some additional insight on the Survivor Crisis, I got in touch
with my pop culture guru, Tony, who first introduced me to “Beauty and
the Geek.” As a bonus, Tony also happens to be Asian.

“The race problems in the world suck enough without needlessly putting
them on display in the petri dish of reality TV,” he writes. “Nor do
they need to be exploited by a television show that is desperate for
ratings and has obviously run out of ideas. But on the other hand,
this show has more Asians on it than all the reality TV shows of the
last five years put together.”

I personally lost count of the number of Asian contestants since Kel
Gleason, the military intelligence officer falsely accused of sneaking
beef jerky into the game on Survivor Australia.

Race played no role in that ridiculous episode. Blacks, whites and
Hispanics are equally vulnerable to beef jerky conspiracy theories.

And in the end, I imagine race will play a negligible role in the Cook
Islands. And not just because people will have to forge alliances
across racial lines to have any chance in hell of winning.

Reality shows like “Survivor” are manipulated reality. Tensions are
manufactured or exaggerated with leading follow-up interviews. Editing
and music makes any emotion more dramatic. If any racial slur bombs
are dropped, they’ll be neutralized with an “After School Special”
learning moment about tolerance and the dangers of prejudice.

Even if there is real tension, there’s no way CBS is going to promote
a weekly hatefest. The network wants to make money. And thank God,
right now the white supremacists are not a coveted advertising
demographic.
**
Darren Garnick’s “Culture Schlock” column runs every Thursday in
Encore. Reader comments are welcomed at cultureschlock (at) gmail.com
**

To learn more about Brown vs. Board of Education, visit the Brown
Foundation.

Find out why Survivor contestant Billy Garcia was inspired by the song
“Jukebox Hero.”

What happened when Morris Dees sued the Aryan Nations?