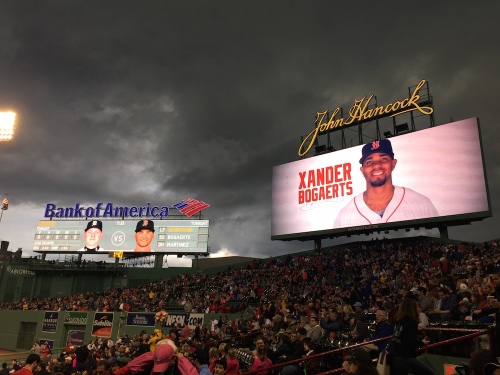 I snapped this pic from the bleachers during the early innings of the Red Sox-Tigers game on June 5, 2018. It looks like a foreshadowing scene in a low-budget apocalypse movie!

That’s what the baseball agents are thinking, too. 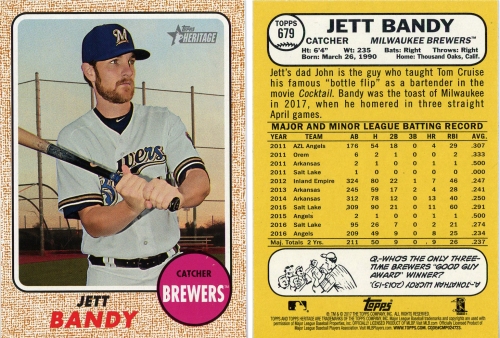 What Does a Bad News Bear Say to an Overweight Panda? 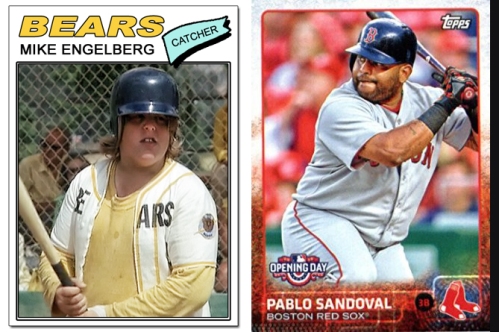 On the 40th anniversary of “The Bad News Bears,” I tracked down once-chubby catcher Mike Engelberg for his observations on the “Fat Panda” controversy with overweight Boston Red Sox star Pablo Sandoval.

You can read my interview at The Hall of Very Good baseball blog.

In the classic movie, Engelberg got melted chocolate all over his uniform and the ball. 12-year-old actor Gary Cavagnaro wound up losing 70 pounds and gave up his movie career. The producers didn’t think a skinny catcher would be “funny” in the sequel.

Cavagnaro, now a 52-year-old sales manager for a multinational electronics company (we all have to grow up), is a fascinating guy!

P.S. I recently defended the besieged Sandoval in a WBUR column, “We Are All Fat Panda.”

P.P.S. The awesome 1977 Mike Engelberg baseball card at the top of this post was designed by the Dick Allen Hall of Fame blog.

Why Do More Kids Choose Lacrosse Over Baseball? 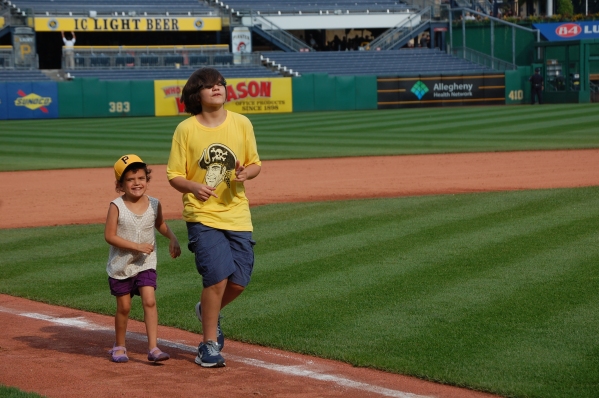 A STEP IN THE RIGHT DIRECTION – More Major League teams like the Pittsburgh Pirates, are taking a page out of the Minor League promotional playbook and letting kids run the bases after weekend games. (Mine got there before the stampede!)

That question has haunted me ever since my days as a volunteer Little League coach. And I got to ask it to Pittsburgh Pirates GM Neal Huntington during my ongoing quest to visit more “foreign” ballparks (outside of Fenway Park.)

You can read my interview with Huntington in this month’s New Hampshire Magazine. Relevance? He’s the son of NH dairy farmers!

P.S. Pittsburgh’s PNC Park is the most impressive ballpark I’ve visited to date.

New San Francisco Tourism Slogan: “What the F**K Are You Lookin’ At?” 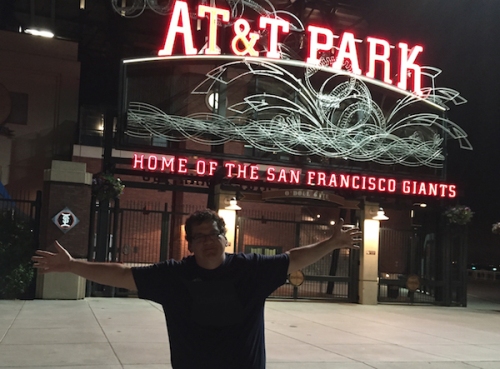 I love visiting other ballparks outside Boston and I seize every excuse I can to visit them. On a recent business trip to San Francisco, the inconsiderate Giants neglected to factor my work obligations into their game schedule. I missed the afternoon game, but at 10:30 at night, after having dinner with friends, I had the ballpark perimeter to myself.

Under dim street lamps, I eagerly devoured every bit of text on the Giants Wall of Fame plaques – it was just like opening up packs of baseball cards from my childhood. With a big grin, I couldn’t wait to see which Giants – perhaps successful enough to make my friend Shawn Anderson’s Hall of Very Good, but not the Baseball Hall of Fame – would show their faces next. END_OF_DOCUMENT_TOKEN_TO_BE_REPLACED 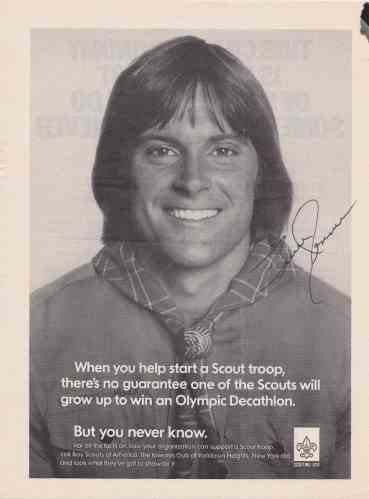 From my childhood autograph collection. I think they had one of these ads for President Gerald Ford and home run champ Hank Aaron, too.

When you help start a Boy Scout troop, there’s no guarantee you’ll grow up to star on a cheesy E! reality show after winning the Olympic Decathlon. But you never know.

Am I the slowest runner EVER? 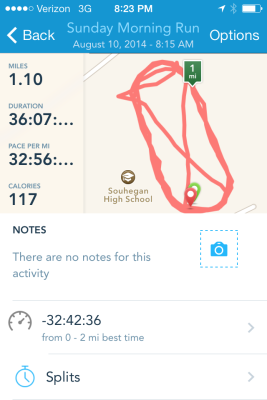 Slowest run ever? These stats speak for themselves.

The sports world was amazed when Roger Bannister first ran a 4-minute mile in 1954.

Moroccan Olympic gold medalist Hicham El Guerrouj now owns the world record for the mile at 3 minutes 43 seconds (watch him do it).

So how did I wind up taking 527 times as long as Mr. El Guerrouj to strut a mere four laps around my local high school track?

Forgetting to shut off the RunKeeper app will do that to you.

P.S. The world record for the Beer Mile — an insane competition requiring runners to chug a can of beer every quarter mile — is 4 minutes 57 seconds. 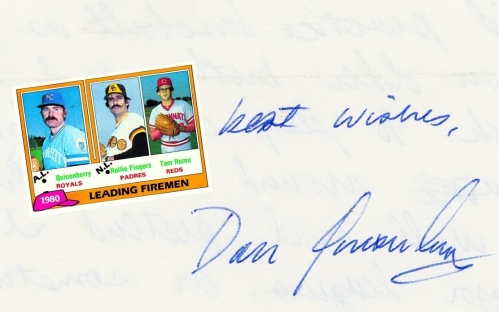 I was a Red Sox fan growing up, but how could I NOT love Kansas City Royals closer Dan Quisenberry, the guy who led the league in saves throwing underhand!

About the only places they live on are birthday cards, thank you notes and summer camp letters, which kids are forced to write because nostalgia keeps their parents signing those checkbooks (another endangered medium).

On the occasion of one of my favorite childhood baseball players, Dan Quisenberry, missing out on the Baseball Hall of Fame, I just wrote a column for The Atlantic reminiscing about the thrill of receiving a two-page letter from him in 1981. (“How Athletes Ensure Immortality: Not all greats make the Hall of Fame. Not all Hall of Famers are remembered. But a player who forges personal connections with fans with live on.”)

You can read the story here, but I’d also like to share the full text of the letter for the benefit of the world’s Kansas City Royals fans — or anyone who still cherishes the power of handwritten letters.

The idea of a professional athlete, let alone the American League’s best closer, taking the time to write a two-page letter to a kid he thought was “creative,” is unfathomable to me as a jaded adult. Sadly, Quisenberry died of brain cancer at age 45 — younger than the age that many of the kids watching him pitch would be now.

Here’s Dan’s letter for you to read for yourself:

The Ugly Truth: Why I Really Won the T-Bones Restaurant Mascot Race 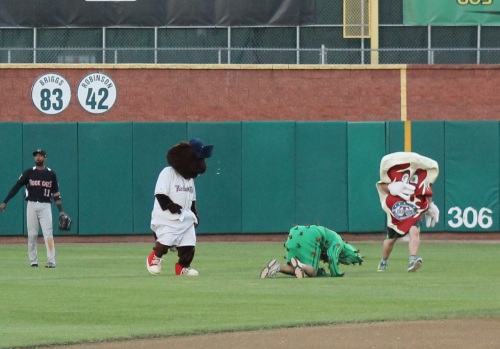 But you’ll have to read all about it in New Hampshire Magazine!

The Man Who Made Me a Baseball Fan 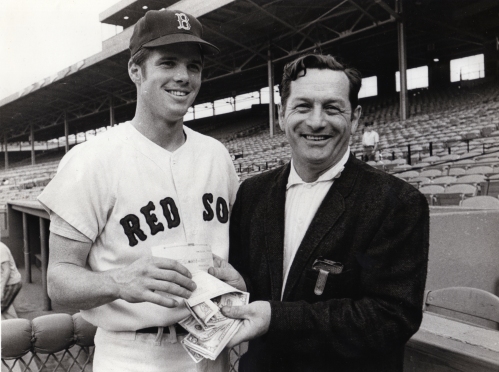 Abraham “Bob” Tubin with Red Sox second baseman Mike Andrews at Fenway Park in the early 1970s. Tubin was making a donation to the official Sox charity, The Jimmy Fund, on behalf of his fellow Boston Herald truck drivers.

To my Grandpa Bob Tubin, every Red Sox player who wasn’t Ted Williams or Yaz was an overpaid bum or “primadonna,” but the TV was always on Channel 38.

I used to fall asleep on his couch and get woken up when Butch Hobson or George Scott would go deep.

Awesome that he got to see the 2004 Sox win the World Series before he died. Here he is with 1967 second baseman Mike Andrews, making a donation to The Jimmy Fund from his fellow Boston Herald drivers.

Andrews went on to become president of The Jimmy Fund and my grandfather went on to turn his grandson into a baseball fan. He would have LOVED the World Series victory last night!