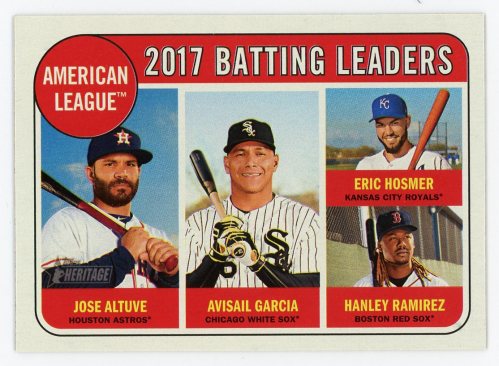 On the heels of finding out that Yankees sluggers Aaron Judge and Gary Sanchez might not really be BFFs, I found this other Topps Heritage card crediting Red Sox first baseman Hanley Ramirez for finishing fourth in the American League batting title last year.

Although I love Hanley, I remember his season being rather streaky and lackluster. So I looked up his 2017 stats: He hit .242.

Turns out that it was Cleveland Indians third baseman Jose Ramirez (.318) – the Ramirez with less interesting hair – who finished fourth in the AL batting race. The Ramirezes look absolutely nothing alike.

I hope Topps corrects the error and gives Jose his due. Even more so, I hope Hanley hits .318 this year!

Are These Yankees “Pinstriped Pals” or Just “Awesome Acquaintances?” 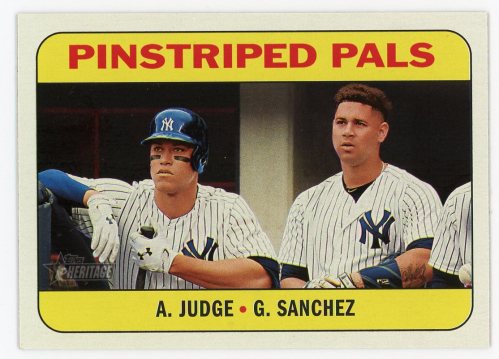 I love when baseball cards feature multiple players together and celebrate or fabricate what they have in common – i.e. putting Mickey Mantle and Willie Mays (1962) on a card and calling them the “Managers’ Dream” or grouping Jim Rice, Kirby Puckett and Jose Canseco (1987) as “The A.L. Pitcher’s Nightmare.”

So I was amused to see this 2018 Topps Heritage pairing of young Yankees stars Aaron Judge and Gary Sanchez, who are being billed as “PINSTRIPED PALS.”

Really? I’m not sure who looks more disinterested in friendship: Judge or Sanchez.

And although the back of the card notes that the pair set a Major League record for most homers by teammates under age 26, there is no mention of this alleged friendship. Just baseball stats and talk of future potential (not for a relationship).

I did some in-depth research (Googling “Are Aaron Judge and Gary Sanchez friends?“) and the results are inconclusive.

However, there is strong evidence that Aaron Judge recently formed “an instant friendship” with Giancarlo Stanton.

So what’s the deal, Topps? If these guys really are “Pinstriped Pals,” why not include an anecdote or fun fact to back up your headline? And if they’re not really friends, what would’ve been the harm in labeling them “Awesome Acquaintances?”