Are These Yankees “Pinstriped Pals” or Just “Awesome Acquaintances?”

I love when baseball cards feature multiple players together and celebrate or fabricate what they have in common – i.e. putting Mickey Mantle and Willie Mays (1962) on a card and calling them the “Managers’ Dream” or grouping Jim Rice, Kirby Puckett and Jose Canseco (1987) as “The A.L. Pitcher’s Nightmare.”

So I was amused to see this 2018 Topps Heritage pairing of young Yankees stars Aaron Judge and Gary Sanchez, who are being billed as “PINSTRIPED PALS.”

Really? I’m not sure who looks more disinterested in friendship: Judge or Sanchez.

And although the back of the card notes that the pair set a Major League record for most homers by teammates under age 26, there is no mention of this alleged friendship. Just baseball stats and talk of future potential (not for a relationship).

I did some in-depth research (Googling “Are Aaron Judge and Gary Sanchez friends?“) and the results are inconclusive.

However, there is strong evidence that Aaron Judge recently formed “an instant friendship” with Giancarlo Stanton.

So what’s the deal, Topps? If these guys really are “Pinstriped Pals,” why not include an anecdote or fun fact to back up your headline? And if they’re not really friends, what would’ve been the harm in labeling them “Awesome Acquaintances?”

I'll trade you two Albert Pujols and a Saddam Hussein for Hafez Assad and a Dictator to Be Named Later.

Kids don’t stick trading cards in their bicycle spokes anymore. Heck, do kids even get off their rear ends and ride bikes these days?

I can’t imagine that this Hafez Assad card was that popular on the playground. If you think that Bashar Assad is now being an unreasonable man, his daddy was not the posterboy for Amnesty International either.

Yet, Topps makes Hafez sound like a harmless old man who just yells at the neighborhood kids to get off his lawn. Here’s the inscription on the back of his rookie card:

“The President of Syria, Hafez Assad played an important role in Operation Desert Shield and Desert Storm. As the leader of a radical Arab nation and Iraq’s neighbor, the Allied coalition was happy to have Syria’s cooperation and help. However, Hafez Assad always made it clear that Syria’s cooperation hinged on the issue of Israel not becoming involved in the conflict. With this in mind, Assad still contributed troops and arms toward liberating Kuwait from his old rival Saddam Hussein.”

I’m sure the people of Kuwait remain SO grateful for the three armored snack trucks that Syria sent to the front lines.

And as for Israel “not becoming involved in the conflict,” I can tell you first hand that they got involved.

(If you like to collect more risque Middle East artifacts than trading cards, check out “The Secret Life of Syrian Lingerie.”)

The absolute worst baseball-themed game of all time.

Although a noble attempt to regenerate kids' interest in baseball cards, the Topps Attax game could very well repel an entire generation.

Let the record show that the baseball card hobby amongst children is already dead, victimized by foolish price inflation, holograms ($3 for 6-card packs, REALLY?) and some crappy toys called Bakugan.

Because I’m a sucker for hopeless causes, I was delighted to see Topps make an effort to make baseball cards fun again instead of creating the illusion of investment. I was thrilled to see the Topps Attax game at Target and hoped it might generate some enthusiasm with my eight-year-old son.

Here’s some advice. Instead of buying the starter set and playmat, take your five bucks to the nearest bank and convert it to quarters. Then take the coins and keep feeding the nearest parking meter until your hands are empty. Because watching those meter numbers go up is a gazillion times more enjoyable than this pitiful game.

Last time I checked, the number 96 beats the number 88 every single time. So by Topps logic, batting champ Ichiro Suzuki will NEVER get a hit off Greinke, unless he throws a change-up. With a 96 and 97 rating for fastballs and curves, only a handful of hitters could make contact off Greinke, which would give him 100 wins and a 0.32 ERA.

Another asinine rule: If a batter gets a hit, it’s the equivalent of scoring a run. Topps has basically replaced America’s National Pastime with cricket.

Take a look at the above fantasy match-up between Baseball Hall of Fame strikeout king Nolan Ryan and young slugger Justin Morneau, who are not contemporaries. According to these configurations, no natural fastball hitters would EVER even foul off a pitch against Ryan.

The truth is that Ryan, as intimidating as he was on the mound, had a career record of 324 wins and 292 losses. Yes, he struck out an ASTOUNDING 5,714 batters, but he also gave up 3,923 hits. No one strikes everyone out all the time. Except for the Topps Attax Ryan. Which is what makes this game beyond boring. It will never come out of the box again.

And as a guy who grew up on Stratomatic and later became addicted to Fantasy/Roto Baseball, nothing saddens me more.

Did you REALLY think Wade Boggs was going to pay for your kid’s future college education? 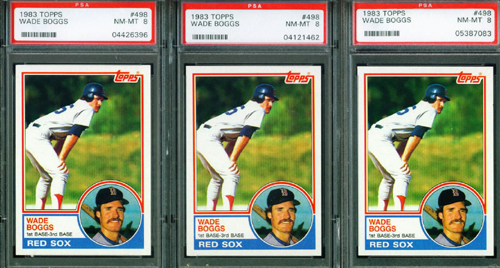 Sucking the Joy out of Card Collecting: Baseball card enthusiasts today are more like dorky coin collectors, caring more about microscopic ink discolorations on “graded” specimens than the HR and RBI stats on the back!

Do you have a secret stash of baseball cards from your childhood, either stored in your basement or perhaps even in your childhood bedroom, which your parents have left untouched since the day you left?

Here’s the bad news. If your collection is from the 1980s or 1990s, not only won’t you be able to retire on the proceeds — you’ll be lucky to make enough to buy a steak dinner at the Capital Grille. And that’s only if you’re fortunate enough to even find a buyer.

Author and Yankees fan Dave Jamieson explains why in my Boston Herald Working Stiff column this week. Although steroids and the baseball strikes have contributed to the contraction of the baseball card market, it mostly comes down to greed and overproduction — more than 81 BILLION cards were printed annually at the peak of the hobby in the early 1990s.

That means that Barry Bonds and Ken Griffey Jr. rookie cards are like Monopoly money. According to Jamieson, author of “Mint Condition: How Baseball Cards Became an American Obsession,” those unopened boxes you hoarded in your basement are absolutely worthless.

Jamieson’s book is a phenomenal primer in the pitfalls of personal investing and the dangers of believing something is valuable just because everyone says it is (see: Tickle Me Elmo, Retired Beanie Babies).

I thought my Wade Boggs rookie cards would at least fund a vacation. Maybe in his honor I could buy some chicken wings instead.