Red Sox Fanboy Flashback: Dustin Pedroia Once Said “Hi” to Me in a Hotel Lobby

Following a few heartbreaking seasons of insurmountable injuries, Red Sox second baseman Dustin Pedroia announced his retirement from baseball today. As a tribute, I’d like to share this fun CNN commentary (“I am a Red Sox fanboy“) I wrote about the time I once made direct eye contact with Dustin in a Tampa hotel lobby.

I might be wrong, but in the swirl of mixed emotions on his Retirement Day, I suspect that Dustin may not be wistfully recalling the same memory.

Documented for posterity (for both Red Sox historians and my descendants browsing Ancestry.com), here is a description of our chance encounter in the lobby of the Vinoy Renaissance Hotel:

NIGHT ONE, 11:30 pm – I spot a diminutive bearded guy briskly walking toward me. It’s second baseman Dustin Pedroia, the 2008 AL MVP. “Hey, good game tonight!” I say. Dustin is wearing headphones and could have pretended to be absorbed by the music. But he turns back, stares at me with the same intensity he reserves for Justin Verlander, and says “Thanks.” It was “thanks” with a period, not an exclamation point. But it was a long day and he certainly didn’t lack any enthusiasm on the field. And then, just like in “Field of Dreams,” he vanishes.

And a follow-up sighting of another Boston legend the next day in almost the same exact spot:

DAY TWO, 2 pm – Near the front desk’s complimentary jellybean bar, I see the greatest Red Sox pitcher of all time, the retired Pedro Martinez, blankly staring in my direction. I give him a friendly nod, the kind guys silently exchange in the halls at work or at the gym. He doesn’t pick up on the signal, so I don’t bother to tell him that the jellybeans are free. Free! Then, just like a regular person, Pedro checks into his room. I never saw Pedro again.

So if you are also just dying to know whether David Ortiz is a good tipper, or which member of the 2013 World Championship Red Sox likes deep sea fishing, you can read that kind of on-the-ground intel here.

Coming to a Dollar Store Near You: A Lego-like Stephen Drew 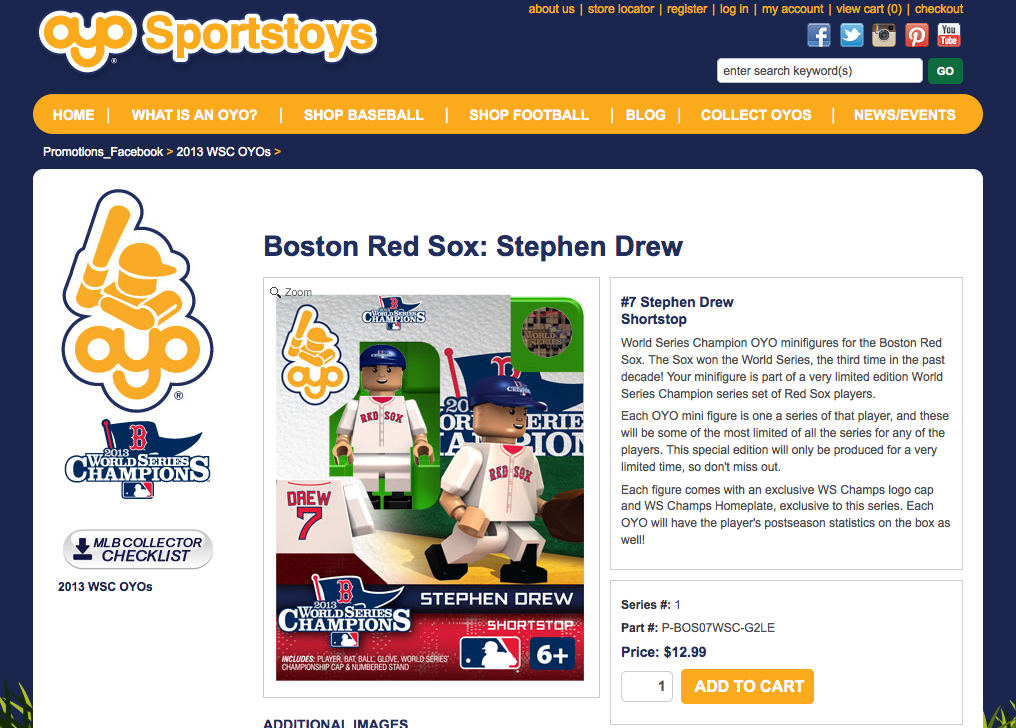 I can say this as the owner of a Curt Schilling figurine, a Weeble-like Manny Ramirez, a Pedro Martinez Jack-in-the-Box and the Mike Lowell and Johnny Damon autobiographies:  This $13 Stephen Drew toy will be selling for a dollar next September.

Maybe even earlier if the Sox don’t resign him.

I’m not slamming Drew. I think his outstanding defense still saved enough runs to justify his atrocious 0-for-whatever batting average before Game 6 — and I was thrilled for him when he hit that World Series homer.

But I’m going to pass on this round of Red Sox World Series souvenirs. Being in the bleachers for Big Papi’s grand slam in Game 2 of the AL Playoffs and seeing Dustin Pedroia in a hotel lobby is enough for me this time!

As an aside, I’m still smitten by Jake Peavy’s World Series souvenir, his $75,000 Boston Duck Boat! 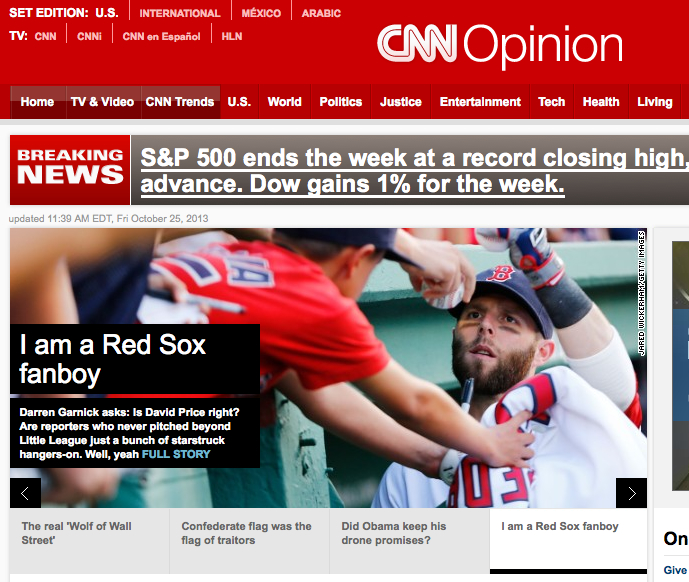 Read “I Am a Red Sox Fanboy,” my column for CNN.com, by double clicking Dustin Pedroia’s beard.

Journalism has brought me close up with political leaders, CEOs, inventors, scientists, actors, musicians and even Squiggy from “Laverne & Shirley” fame.

But only baseball players can make me feel 12 years old again.

Timed for the World Series, I wrote a fun column for CNN.com about the thrill of spotting Red Sox players out of uniform — without the help of baseball cards.

“Is baseball hothead David Price right? Are the millions of us who never pitched beyond Little League just a bunch of starstruck wannabes?

During the American League Divisional Series, the Tampa Bay Rays star lashed out at the media after giving up seven earned runs in seven innings. “Nice questions, nerds!” he hissed at reporters. Then Price got mean. On Twitter, he called Sports Illustrated scribe Tom Verducci a nerd who “wasn’t even a water boy in high school.” He stopped there, passing up the temptation to mock Verducci’s prom date or how much he can bench press.

Price’s snotty attitude exists for one reason. Many of my fellow baseball nuts DO think players are cooler than the rest of us. The fact is, no matter how successful we may be in our professional lives, many of us would instantly trade in our careers for a (your team here) uniform.”

Oddly, a tongue-in-cheek column like this has attracted some angry comments directed at Boston and Bostonians. I know writers are advised to NEVER read the anonymous comments beneath their stories, but I always touch the Third Rail.

Check out my column, “I am a Red Sox Fanboy,” and please share it with fellow baseball fans. Even though it’s focused on the Sox, you really could fill in the blanks with players from your favorite team — or characters from any celebrity watching endeavor for that matter.

Political Button of the Day: Mets farmhand Wilbur Huckle and the Metropolitan Party

Gearing up for Election Day, I will occasionally share a favorite button from my modest-but-quirky political memorabilia collection. 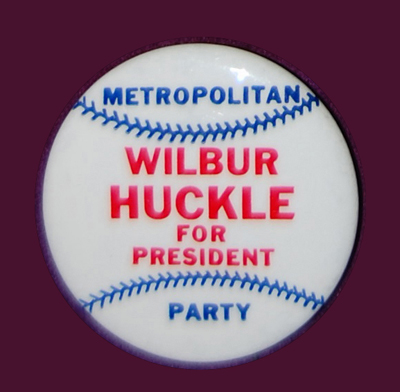 **
Sometimes no matter how crappy he is in the clutch, a baseball player can be beloved for his name only. You know, the perfect baseball name. Like Duffy Dyer, Tug McGraw or Coco Crisp, whose name was so cool that fans thought he would be another Johnny Damon by coolness alone. I’m embarrassed to say I bought Crisp’s rap album.

The novelty wears off of course, when the realization kicks in that a guy with a boring name that hits .285 is far preferable to the “colorful, zany character in the clubhouse” who hits .230. Yes, I mean you, Kevin Millar. (For the record, I did not buy any of his albums).

But back to politics. Wilbur Huckle was a minor league fan favorite in the Mets farm system who didn’t even get one of those Moonlight Graham pity at-bats in the major leagues. In 1964, flush with excitement over their new digs at Shea Stadium, New York fans jokingly formed the “Metropolitan Party” and nominated Huckle as their presidential candidate.

Occasionally at Fenway, you’ll see a handmade “David Ortiz for President” sign vying for four seconds of TV coverage. But these buttons were everywhere at Shea.

Huckle, who was the minor league roommate of future Mets Hall of Famer Tom “Terrific” Seaver, did not wind up with any electoral votes against Lyndon B. Johnson and Barry Goldwater — but how many light-hitting Mets minor leaguers from the 1960s do we still talk about today?

“Shortshop Wilbur Huckle had the surest hands of any Mets infielder and delighted Bowman Field fans with his hustle and work ethic. Though small in stature, the affable redhead was a scrapper and one of the most popular players during the Mets years in Williamsport. He often conducted impromptu fielding clinics for neighborhood kids outside his Cherry Street apartment before arriving at the ballpark for official duty.”

“Affable redhead?” Sounds like a description of Lucille Ball.

The fact that Mets fans zealously adopted Huckle reminds me of Charlie Brown’s undying devotion to his favorite baseball player, Joe Shlabotnik, who batted .004 in one season due to a lucky bloop single. He also once threw out a runner who had fallen down between first and second base.

After retiring, Shlabotnik went on to manage one game with the Waffletown Syrups and was fired for ordering a suicide squeeze play with no one on base, according to the historians at Peanuts Wiki.

Huckle went on to manage the Batavia Trojans for three seasons (1972-1974), skippering his clubs to two sixth place finishes and one fifth place finish.

If you’re reading this, Mr. Huckle, please get in touch and let Mets Nation know which candidate you are supporting in 2008!

I have to be honest. When I first saw Mario Alejandro’s baseball card video prominently featuring close-ups of his wife’s cleavage, there was a disconnect for me.

I knew baseball cards were in trouble with the kids market — with all those Yu-Gee-Go and Magic cards taking the place of Yazzes and Reggies (am I dating myself?) — but were breasts really necessary to recruit collectors?

If you’re curious about Mario’s artistic motivation, check out today’s “Working Stiff” column in the Boston Herald — and the exclusive Blogger Burnout Survey in the Working Stiff blog.

But before you judge Tatiana, a.k.a. Mrs. Wax Heaven, for flashing some skin, admit she’s no different than the women staffing 90 percent of the booths at any corporate trade show.

Let’s move beyond the busty imagery and get serious. Mario, who zealously aims to become the most influential baseball card blogger of all time, has captured what’s wonderful and despicable about the hobby I once loved as a kid.

The wonderful: It’s still a blast to experience the suspense of opening a baseball card pack and musing about the random combination of players, their statistics and possible meaning to your hometown team.

While the “headless” Tatiana (Mario chooses only to focus from chin down) was on Vanna White duty, here are some bits of trivia and commentary fired off by the man behind “Wax Heaven.”

*** WAX HEAVEN TRUTHS ***
1. Hall of Fame shortstop Ozzie Smith once got sucked into a Black Hole in a Simpsons episode.
2. “Reggie Jackson is the 1970s version of Jose Canseco.” Reggie will love that one!
3. Cubs/Cardinals bullpen legend Bruce Sutter has “a porn star mustache.”
4. Bill Clinton has his own baseball card. He’s wearing a Cleveland Indians uniform throwing out the first pitch. No Hillary cards, though.
5. The Mets’ David Wright is “overrated.”
6. Red Sox icon David Ortiz looks a lot like washed-up Sox icon Mo Vaughn. (Other than their skin color and stomachs, I heartily disagree).
7. The Red Sox broke the Curse in 2004 “due to a Drew Barrymore movie.” (Again, I heartily disagree. It was because of Matt Damon and Ben Affleck).

And the despicable part of the hobby? Baseball cards today are like lottery tickets. Instead of getting excited about landing their favorite player, kids and adult-kids are just focused on how much they can get on eBay for rare limited edition inserts.