While hunting for baseball cards at my local flea market, I came across this unexpected relic:

How many 19th century French novelists are in YOUR baseball card collection? 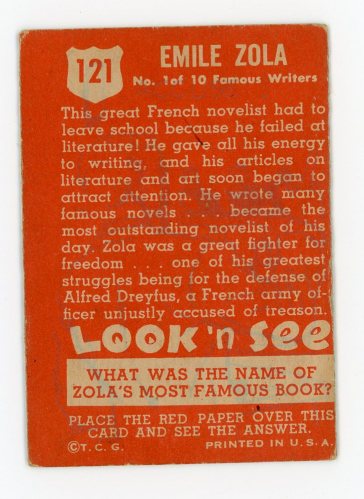 Pretty wild that a French journalist who exposed an anti-Semitic plot to frame a Jewish army captain for treason in 1898 could compete for equal mindshare with Mickey Mantle. But in the 1952 Topps “Look ‘N See” trading card set, the infamous Alfred Dreyfus trial had a cameo.

For some perspective, take a look at who qualifies as a trading card hero for today’s kids: Hot dog eating champion Joey Chestnut.

So how did Zola wind up achieving American cardboard immortality? Likely due to “The Life of Emile Zola” being the 1937 Oscar winner for Best Picture.

Might a movie on Chestnut’s performance in Deep-Fried Asparagus Eating Contests also be in the cards?

Filed under Trading Card of the Week