I was a Red Sox fan growing up, but how could I NOT love Kansas City Royals closer Dan Quisenberry, the guy who led the league in saves throwing underhand!

About the only places they live on are birthday cards, thank you notes and summer camp letters, which kids are forced to write because nostalgia keeps their parents signing those checkbooks (another endangered medium).

On the occasion of one of my favorite childhood baseball players, Dan Quisenberry, missing out on the Baseball Hall of Fame, I just wrote a column for The Atlantic reminiscing about the thrill of receiving a two-page letter from him in 1981. (“How Athletes Ensure Immortality: Not all greats make the Hall of Fame. Not all Hall of Famers are remembered. But a player who forges personal connections with fans with live on.”)

You can read the story here, but I’d also like to share the full text of the letter for the benefit of the world’s Kansas City Royals fans — or anyone who still cherishes the power of handwritten letters.

The idea of a professional athlete, let alone the American League’s best closer, taking the time to write a two-page letter to a kid he thought was “creative,” is unfathomable to me as a jaded adult. Sadly, Quisenberry died of brain cancer at age 45 — younger than the age that many of the kids watching him pitch would be now.

Here’s Dan’s letter for you to read for yourself: 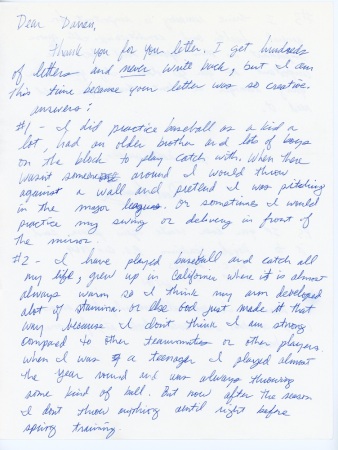 Opening Day Meditation: How I Learned to Stop Hating the New York Yankees 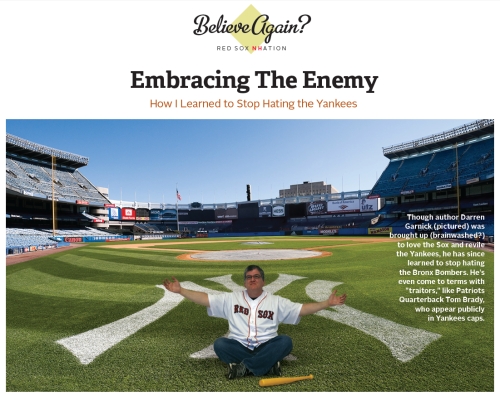 New Hampshire Magazine’s Photoshop guy is phenomenal. Yes, I did go to Yankee Stadium for this story, but the yoga happened at their Manchester newsroom. That’s a Kevin Youkilis jersey in case you were curious. (Double click to read story)

Based on the injuries the Yanks are battling with A-Rod, Jeter and Texiera, there’s a fair chance that Boston and New York will be fighting each other to stay out of last place this year.

Sure, celebrating would be premature at this point, but fans in Baltimore, Toronto and Tampa Bay have to like their chances in the AL East where the Sox and Yanks used to trade off the division title and the Wild Card every season.

Before the Sox took their depressing nose dive, I surprised my son with a Yankee Stadium trip to see the home team when Sox-Yanks tickets at Fenway were simply unaffordable. To my surprise, I liked many of the people sitting around me despite my lifetime of regarding Yankees fans as arrogant, obnoxious punks. You can read my humble attempt at a Nobel Peace Price nomination in the April issue of New Hampshire Magazine, on newsstands now.

I love this cover, especially since New Hampshire was recently ranked as the Least Religious State in America by the Pew Research Center. The Red Sox is a more popular religion around here than Christianity, Judaism, Islam and Hinduism combined.

My first cover story for New Hampshire Magazine explores the die-hard subculture of NH Red Sox fans — and their fragile psychology after one of the most disappointing seasons in Sox history. (Cover design by J Porter)

We left no New Hampshire baseball angle unexplored, even tracking down Carlton Fisk’s 1963 high school yearbook. He’s the guy holding the trophy on the far right.

What if Carlton Fisk had decided to pursue pro basketball instead of pro baseball?

You can read the full story here.

The United Countries of Baseball

The United Countries of Baseball, according to Nike.

I discovered this brilliant Nike poster four years after the fact, but it still resonates with me. Heck, I’m still enamored by their Ken Griffey Jr. for President campaign.

Click on the picture above for an enlarged version. The demographics are fascinating:

Can any baseball fans out there point out any geographical inaccuracies here?  Or explain any of my conundrums?

Does the baby who this body belongs to get any modeling credit?

My romance with the New York Post began at least two decades ago, but how wondrous to discover that the passion is just as strong as it was when I got the first newsprint smudges on my fingertips.

This Pedro Martinez crybaby World Series cover is the most amusing tabloid Photoshop gag since the infamous “Axis of Weasels” front page during the Iraq War.

The courage to call a weasel a weasel