Though many may see Phish as the heirs to the Grateful Dead, Jerry Garcia’s band never regaled audiences with renditions of “Jerusalem of Gold” – in Hebrew, no less

They never asked to inherit the mantle of the Grateful Dead after Jerry Garcia’s death. They seldom sing about utopian peace, love or brotherhood. But whether they accept the honors or not, the members of the undefinable Vermont band Phish are the shaggy-haired heirs to the Grateful Dead. Their ever-expanding and faithful population of “Phishheads,” comprised mostly of those born after Volkswagen buses went out of vogue, are keeping the American hippie mystique alive.

Guitarist Trey Anastasio, keyboardist Page McConnell, bassist Mike Gordon and drummer Jon Fishman, all hovering around age 30, often bounce mid-stage on trampolines, not missing a beat in their performance – which is never the same set of songs as the previous night. The crowd-pleasing Fishman wears a polka-dot dress in concert and sometimes plays the vacuum cleaner as a musical instrument. Like the Grateful Dead, Phish has always sold more concert tickets than albums and encourages its fanatically loyal fans to make bootleg tapes of their shows. 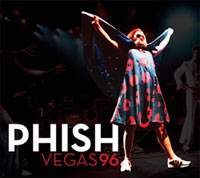 It is no accident if some of Phish’s infamous free-wheeling jams – which never get airplay on mainstream radio stations – include occasional snatches of Hebrew. Fishman and bassist Mike Gordon are Jewish, and bundled in their tie-dyed core are strands of klezmer and even “Jerusalem of Gold.” The Hebrew lyrics of Naomi Shemer’s classic song, which turned into an ode to the reunification of Jerusalem after the 1967 Six-Day War, was featured in the liner notes of the group’s 1994 album “Hoist,” and the melody made its way into the end of a long instrumental on the disk, just as it sometimes unexpectedly surfaces in concert.

Gordon, who attended the Solomon Schechter Hebrew Day School in Newton, Massachusetts, in his youth, used to hear the tune on one of his parents’ Israeli “Greatest Hits” compilation albums, which got major air time in the house. “It’s been a melody that has been stuck in my head since childhood. We sort of sing a mediocre – or bad – version of the song,” the self-effacing Gordon recently told The Jerusalem Report. “The first time we played the song in concert was a great moment. It was at a sold-out show near Boston, and 17,000 people were perfectly silent. They didn’t know what they were hearing” – not surprising, since Phish was performing it in Hebrew. “It was special, because my grandmother was there.”

Gordon, whose grin adorns the cover of Phish’s 1996 release, “Billy Breathes,” recalls that the non-Jewish band members “were eager to do ‘Yerushalayim Shel Zahav.’ I’m more familiar with Hebrew than Jon. It was difficult for them to learn their parts. I’m not as religious as I used to be,” he says. “But at the same time, I feel I have a strong Jewish identity and it is an important part of who I am.”

THE “PHAB PHOUR,” as some wryly refer to them in writing, are always striving to outdo themselves on the quirky meter. Adopting “musical costumes,” for Halloween concerts, the band has done shows consisting entirely of cover versions of the Beatles’s “White Album” and The Who’s “Quadrophenia.” This year they were the Talking Heads, performing songs from their album “Remain in Light.”

While non-Phish fans are quick to dismiss some of the band’s own lyrics as foolish babble, they will never be accused of attending the Cliche School of Songwriting. “Scent of a Mule,” for example, is about a girl and her donkey trying to make peace with their UFO abductors. Trying to be diplomatic, she urges the aliens: “Stop, we ain’t looking for a fightin’… Come on over for some lemonade – just follow me now with the whole brigade.” The appropriately titled “Dinner and a Movie” is an endless reel of the dating refrain, “Let’s go out to dinner and see a movie.” And another foot-tapper called “Contact” is a silly, rhyming tribute to our dependence on the automobile: “The tires are the things on your car that make contact with the road… Bummed is what you are when you find out that your car has been towed.”

The band has been together since 1983, when three of its four members met as freshmen at the University of Vermont. Attracting a strong following on the college pub circuit, the musicians held a series of jobs as odd as their song lyrics. According to their fan newsletter, “Doniac Schvice” (the name was chosen by the band itself, and has no known meaning in any modern language), McConnell once worked in a candy store painting white spots on chocolate cows and Fishman formerly stitched maternity bathing suits.

What probably draws most fans, Jewish or otherwise, to Phish is the energetic dancing the band’s concerts afford them the opportunity to partake in. “The appeal of a Phish concert is sweat, gallons and gallons of sweat, although the stench from the unwashed hippies can be a turnoff,” says Al Kaufman, a music critic from Austin, Texas. “Phish just plays. There is no overpowering light show or technical wizardry. It is just a bunch of great musicians on stage enjoying what they are doing. That’s rare today.”

That may be why a two-day concert at an air force base in Plattsburgh, New York, last August, drew 135,000 fans. And why, in the spirit of the Deadheads, Phish has a ferociously loyal national following that includes fans who follow them from show to show. And though live performances are still their bedrock, record sales are nothing to sneeze at either: The band now has three gold albums (500,000 copies sold), “Hoist,” 1995’s “A Live One” and “Billy Breathes,” their latest.

Cincinnati social worker Jonathan Willis, who regards himself as a fan of both Phish and the Grateful Dead, maintains that the comparison between the two bands is an unfair one. “Obviously, the death of Jerry contributes to their recent surge in popularity. The Generation X-ers are looking for a sense of community and bonding around the ideas of hope and peace. People are projecting that onto Phish,” Willis says. “But Phish has a much more ironic and fun view of the world than the Grateful Dead. They don’t buy into that peace, love and harmony bit as much as the Grateful Dead theoretically did.”

Phish fan Lynda Segal, who works in magazine production in Massachusetts, claims to be drawn by the band’s nonromantic lyrics and Fishman’s offbeat feminine wardrobe, which has been copied by numerous male fans. “I hate groups that sing about love. Love is so overrated,” she says. “And I have to admire any guy who wants to wear a skirt. Pants are very restrictive. There is a certain freedom that comes with wearing a dress.” (Fishman, it should be noted, is not a transvestite per se; he’s just a guy in a dress who plays the drums.)

Segal, who says she was first exposed to Phish while visiting an American friend who was spending time studying in Israel, also likes the idea of Hebrew-influenced hippies: “It’s cool that the band has tapped into their heritage. It’s cool that a Jewish song has become a pop song. But I wonder if the crowd really understands it.” Gordon, who occasionally has sung verses of the High Holy Days hymn “Avinu Malkenu” in concert, concedes that not too many fans probably “get it.” Phish fans, however, have come to expect becoming familiar with the unfamiliar.

“To some, it seems blasphemous to take a holy prayer and play it in concert. I don’t sing it as a joke. It’s an acknowledgment of my heritage,” Gordon says. “When we play it, I can always look up and see the Jews in the audience smiling.”
**

IS IT TRUE THAT 30 PERCENT OF PHISH HEADS ARE JEWISH?

I’ve read this unsubstantiated statistic in several Phish profiles, based on anecdotal evidence at Phish concerts (or by prejudiced bastards who think they can spots Jews in a crowd just by looking at them).

In any case, I highly recommend checking out the most entertaining travelogue ever written about the Jewish-Phish connection: Felix Vikhman’s 1999 Salon essay exploring those “looking for God in a haze of mushrooms and acid.”